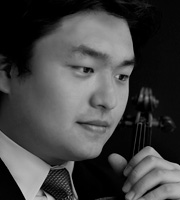 Ying has won prizes in competitions in Europe, China and the United States, including the top prize at the 31st Rodolfo Lipizer International Violin Competition (which included a Cremonese violin). He credits much of his success from the guidance of his teachers, Sergiu Luca and Cho-Liang Lin, at the Shephard School of Music at Rice University, and also the support of his wife, Lihua. They have a dog, Coco, and enjoy watching movies and all sorts of filmed dramas. When taking a break from his practice, Ying likes playing ping-pong, badminton, and listening to jazz and Korean and French pop songs. Although relatively new to Cleveland, Ying and Lihua enjoy meals at Miega, a Korean restaurant,and the quiet, traffic-less roads which keep him in a nice mood--very different from the jam-packed roads of Shanghai. Ying teaches middle school aged students and older, and admits the most embarrassing moment on any stage is when a string breaks. In addition to seeing him perform at Severance, check out Ying's solo performances on YouTube.