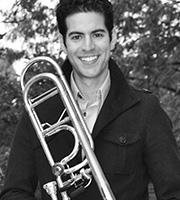 Education: The Curtis Institute of Music

Shachar (pronounced, Sha-car (soft 'c') hails from Nahariya, Israel (Israel's northernmost coastal city) and has taken to the waterfronts and parks of Cleveland. "What do I like most about living in Cleveland? The runs and bike rides in the beautiful parks and streets." He also swims in addition to cycling and running.  Enjoying a multisport lifestyle requires lots of refueling which ultimately means eating good food, another one of his self-proclaimed hobbies. You may see him cruising on two wheels along Chagrin River Road, preparing for his love-hate relationship with Berkshire Road. "Love it on the way down and hate it climbing back up.  Hurts so good!"  To stay fueled, Lock-Keeper's Inn, L'Albatros and Fire are a few of his favorite restaurants. Shachar also loves his dog Apollo, who may tend to the scraps of the restaurant doggie bags, if any.

Shachar is the director of the Cleveland Trombone Seminar.  Find out more at:  clevelandtromboneseminar.org

Shachar can be heard on the following Canadian Brass recordings: