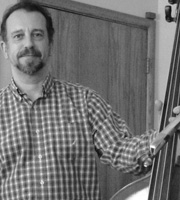 Scott has lived in Cleveland since joining the orchestra in 1978.  He and his wife, Margi, who is a composer and oboist have a daughter, Gaby, who is majoring in Classics (Latin and Greek) at Cambridge University in England.  Gaby is a terrific soprano and a talented composer, no doubt reaping the benefits of being born to such gifted musical parents.  The family has no pets, but Scott observes deer skunks, raccoons, possums and lots of other hungry critters in his yard in Cleveland Heights.  He notes that carpenter bees and squirrels in particular like to dine upon his exterior woodwork.  Being a realtor, Scott doesn’t have much time for hobbies but nurtures an interest in astronomy and golf in his free moments.  When asked if he had an interesting audition story, Scott enthusiastically responded, “Yes!  I was playing in the Milwaukee Symphony at the time I auditioned for The Cleveland Orchestra.  At the last minute, I was forbidden to board the flight with my bass, so I drove all night through a snow storm, arrived in Cleveland early in the morning, feasted at a diner, and played my audition for Lorin Maazel, having had two hours of sleep.  Faced with an unfamiliar work by Arnold Schoenberg I though, ‘Well, Maazel will never know the difference if I don’t play all the notes’ so I just sort of threw my hands around the bass keeping the rhythm as accurate as possible and hoped for the best.  Later I found out that Maazel had perfect pitch...  I have always told my students to eat lots of fish (brain food) before an audition, and since I played in Toluca (Mexico) before Milwaukee, somehow the story got around that I had driven all the way from Mexico City to Cleveland, heating fish sticks on the engine manifold.  A tuba player told my wife this story about me early in our marriage, when she was carpooling to Erie with him.”  When Scott isn’t playing with TCO he likes to listen to Cubanissimo, Afro-Cuban All Stars, James Brown, Motown and Earth, Wind and Fire.  He is on the faculty of the Kent Blossom Music Festival and taught for about 20 years at the Oberlin College Conservatory, and has also served on the faculties of CIM, Baldwin Wallace University, and Kent State University.

Scott can be heard on a couple of old LPs made by the Cleveland Octed, which was active in the 1980's.

La Catrina Quartet: The Piou and the Impious