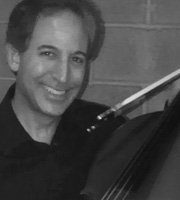 Education: The Eastman School of Music

Instrument: Richard plays a 1917 cello made by Carl Becker.

Richard likes living in Cleveland because it is “a small but great city on a big Great Lake.”  He and his wife, TCO pianist Joela Jones, have one grown son, Justin Weiss.  When Richard ventures out into the local food scene, he prefers Michael Symon’s restaurants (Lola for special meals, Lolita for comfort food and B Spot for burgers), Michaelangelo’s in Little Italy and Winking Lizard in Bedford Heights for late night or take out.  Richard shared this embarrassing onstage moment: “I was playing Stravinsky’s The Rite of Spring while sick with the flu, and my bow flew out of my hand and off the stage.  The next day’s review said that the musicians played with such intensity that Richard Weiss’s bow rocketed into the audience!”  Richard is on the cello faculty at CIM and the Kent Blossom Music Festival.

Suite No. 1 by Ernest Bloch