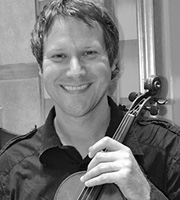 While he's fluent in both German and English, it was Peter's mastery of the language of music that brought him to The Cleveland Orchestra. He likes Cleveland because everything is close by and exploring the Metroparks is a favorite pastime.  Peter played drum set when he was younger and  is still drawn to the rhythmic and percussive elements of avant-garde "classical" music.  He also loves Lady Gaga and violinist Anne-Sophie Mutter. Peter stays in great shape by swimming and running and might choose his post-work out meal at Lucky's Cafe, Maxi's or the Crop Bistro. His most memorable concert experiences include playing an entire concerto with a large-sized, white price tag hanging out of his new, crisp jacket, and watching a mouse do a kamikaze dive (all in cartoon-like slow motion) from the stage into the audience during a Blossom concert.  Peter is an adjunct Professor of Violin at Cleveland State University.