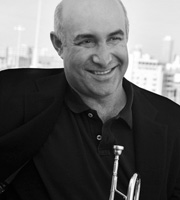 When Mike isn’t busy filling the principal trumpet position here at TCO, he’s occupying himself with a variety of hobbies which include playing baseball and golf, as well as collecting Brooklyn Dodger memorabilia, vintage animation art and historical newspapers.  He’s also been a licensed ham radio operator since 1974 and has had the opportunity to speak with people from over 240 countries.  He loves making Cleveland his home because he finds it a great location to raise a family.  He and his wife, harpist Yolanda Kondonassis have a daughter, ten-year-old Amanda.  They enjoy many of Cleveland’s fantastic eateries such as Lola, Lolita, B-spot, Downtown 140, Moxie, Bravo, and Jack’s Deli--and that’s just to name a few!  Throughout his 25-year career with the orchestra he has had many memorable moments include performing the world premiers of John Williams Concerto for Trumpet, Michael Hersch’s Night Pieces for Trumpet and Orchestra, and most recently Matthias Pintscher’s Chute d’Etoiles (Concerto for Two Trumpets.)  In addition to his busy performance schedule, Mike is a committed educator, serving as Chairman of the Brass division and Head of the Trumpet Department at the Cleveland Institute of Music, as well as serving on the faculty of numerous leading summer festivals.  He regularly presents master classes and workshops throughout the country.  In his spare time Mike kicks back to the tunes of Steely Dan, ZZ Top, Queen, Metallica and Rush.

Live from Severance Hall- Trumpet and Organ with Todd Wilson