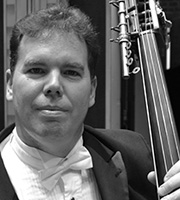 Education: The Curtis Institute of Music

Kevin and his wife, Amy, love to travel. Whether journeying to an NHL hockey game or attending an opera at the MET in New York, there may be a bit of Big Band music accompanying their trip. Kevin remarks that Amy is one of the finest cooks in Cleveland (they keep a full garden) and while they rarely eat out, they enjoy going for sushi at Arashi Japan in Westlake or for a delicious sandwich at Danny’s Deli in Lakewood. Kevin's favorite audition story formed when he was Principal Bass of the Buffalo Philharmonic.  “The former Music Director, Maximiano Valdes, stopped me in the middle of an excerpt from Verdi’s Otello and asked me to tell the audition committee what was going on in the opera at that point in the excerpt. The committee thought they had stumped me.” They were obviously unaware of Kevin’s affinity for opera and his frequent trips to the MET.)  Kevin enjoys many aspects of living in Cleveland; it's only a short trip to Buffalo, where he has family, and the Metroparks provide a beautiful backdrop for long bike rides.