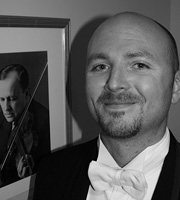 Jesse has lived in Cleveland for 6 years and most enjoys the beautiful summers.  In his spare time he likes to hang out with his three cats, and when the opportunity presents itself you will find him scuba diving, hiking and skiing.  He recounts an interesting audition experience involving post audition comments.  “I once received comments after taking an audition saying, “Your Strauss was out of tune!” having not played anything written by Strauss.  Jesse teaches at Baldwin Wallace University.

You can hear Jesse on: