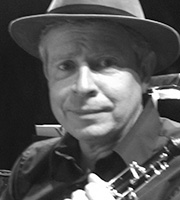 Education: University of North Texas, The Cleveland Institute of Music

In addition to playing the oboe and english horn with TCO, Jeff has a talent for composing which he uses to write music for various ensembles.  When he’s not engaged in various musical endeavors, Jeff likes to golf, read, travel, and spend time with his wife and their dog, Maris, who is an Entlebucher Swiss Mountain Dog, the smallest of the Swiss mountain dogs.  Jeff enjoys many restaurants in Cleveland, though is favorites are D’Agneses in Broadview Heights and Blue Point Grill.  He had these memorable onstage moments to share: “I was running late in leaving the house for a Blossom concert.  I grabbed the first pair of black shoes I could find and unfortunately they were two right feet.  I went ahead and wore them.  I had both toes of the shoes pointing to the left.  It looked pretty funny.  John Mack’s last concert at Blossom was a memorable experience.  He gave the tuning “A” for the 2nd half of the concert, and the audience started applauding.  Softly at first, then louder and louder.  He was asking all of us around him what he should do.  We told him to stand up and take a bow.  The applause became even louder.  It still moves me today when I think about it.”  Jeff teaches at CIM and Baldwin Wallace Conservatory.

You can hear Jeff on: