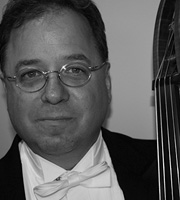 Studied with: David Cobb, Ed Barker, and lots of influence from Henry Portnoi and Francoi Rabbath

Instrument: Henry plays a Bernard Simon Fendt bass made around 1800 and a 2002 Christian Laborie bass.

Hailing from Cleveland Heights, Henry is a family man; his six children keep him on his toes and close to home. When fancying a night out he chooses Marotta's or Brennan's Colony, both on Lee Road. He is a self-reported lapsed woodworker, occasionaly strums his guitar, and is very involved with Noteworthy Federal Credit Union, which serves the arts community of Northeast Ohio. Henry is a dedicated teacher at Baldwin Wallace University Conservatory of Music and to the occasional high school student. Though there are too many cherished musical moments for him with The Cleveland Orchestra, he fondly remembers playing Aaron Copeland's Third Symphony at Tanglewood with Leonard Bernstein conducting and Copeland in the audience.