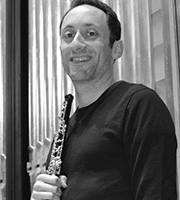 Education: The Cleveland Institute of Music, The Juilliard School

In addition to playing the oboe for TCO, Frank plays a little piano--he started at age 5--and dabbles in electric bass when nobody’s listening.  He listens to a lot of jazz, a boatload of opera, Brahms and Beethoven string quartets and a smattering of rap, Radiohead and other groups with things to say and creative musical minds.  One of his favorite onstage experiences was standing up for the solo bow in his first TCO concert.  He said it felt like the world was cheering for him.

You can hear Frank on:

Live At The Happy Dog